When designing a mobile version of the site, the core question is still what resolution to choose and which ones are the most popular.

By reference to statistics we will consider five the most popular resolutions of mobile screens resolutions. 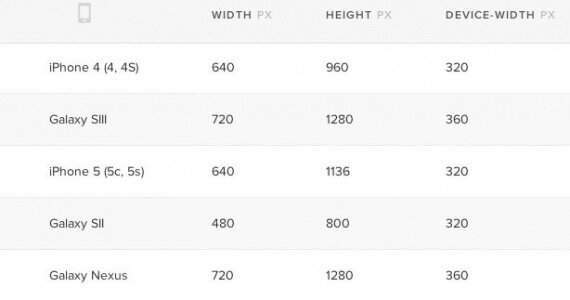 And five the most popular tablet resolutions.

And then media queries are entering the game. For instance, if we add the following code to the style sheet, it will define the site background, provided that a certain device will have 480 or less pixels screen.


We can also use CSS-rule @import for the conditional loading of stylesheets into the current stylesheet. For example, the following code imports the phone.css, provided that a certain device will have the screen and the display area of maximum width 480 pixels.


When creating responsive web-designs the most commonly used media queries are about display area width and device screen width (device-width).


All the features mentioned above can be provided with the prefix min or max to define the range. Look at the following piece of code:

And finally the most convenient media queries for Apple products.