I have recently read an article about computations on C++ templates. One of the comments to the article was a sort of a challenge for me. 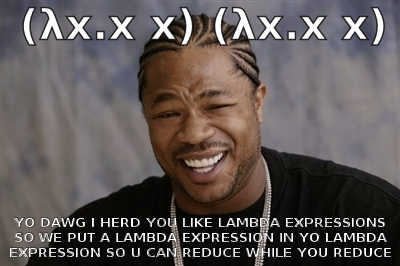 The number of methods to rack your brains with the help of C++ is increasing with every new release.

Especially when the approach to playing field implementation isn’t changed and all the computations are carried out on types rather than constants.


But would it be that difficult to write a multipurpose computer on types, which would be handier for programming rather than a cellular automaton? As it turned out, it’s not difficult. I spent 30 times more hours to write this article than to write and debug the code itself.

I wanted it to be written approx the following way:


And then get following at the output:


The article turned out too long as I had wanted to tell about all the interesting things that had been used here. It also requires the basic set of knowledge about lambda calculus.

Under the cut you will find another constructive proof of C++ templates Turing-completeness in the form of compile-time interpreter of no-type lambda calculus (plus dessert in the form of macros and recursion).