After reading an article about amateur astronomy, I decided to take pictures of stars with the help of a common camera using no telescope. In the mentioned article I learnt about Astro Trackers. An Astro Tracker is a device that is used to compensate rotation of the sky of stars in long-exposures.

Googling for a while, I found out that it’s no problem to buy them, but the price was a bit high. For example, the cheapest Vixin Ploarie Star Tracker costs $400 plus delivery charges. Its carrying capacity also raised doubts. Instead of the wide-angle lens, I was planning to use 70-200⁄2.8. Together with the camera they weigh around a 3-3.5 pounds.

When I was looking for the necessary information, it turned out that people make the so-called Barn Door Trackers, for example: this one, that and other. The operating principle is simple. It consists of two pieces of plywood joined by a door hinge. One of them turns with the same speed as the Earth revolves round its axis. The door hinge axis is directed at the Pole Star. The bottom piece of wood mates on an ordinary camera tripod. As for the movable part, camera attaches to the top piece via a photographic ball head (you can buy it at any camera store).

So, I was eager to make such a tracker by myself, as without it I could only take pictures as the following one: 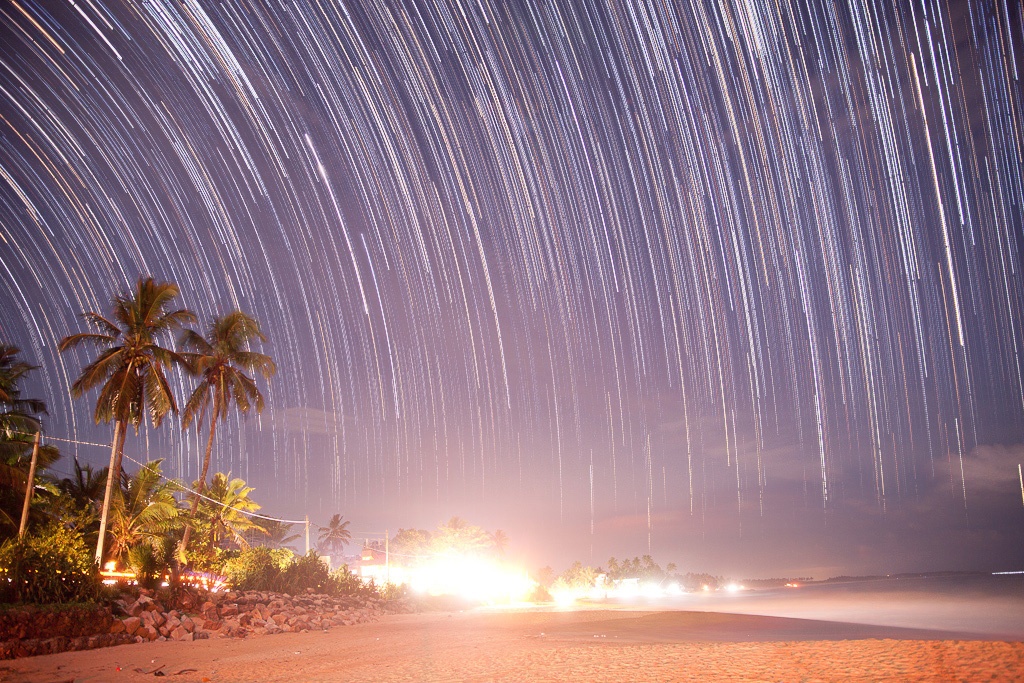 I had all the necessary things. I decided to use this tracker as a basis. There you will also find description of calculation methods for all the basic parameters.

I decided to go with a 0.04 inches plywood as I had the experience of laser cutting it in my workshop. Plus, this material is really cheap and handy. As for reliability, I was not sure at the time. I could tell about it after the operation testing. 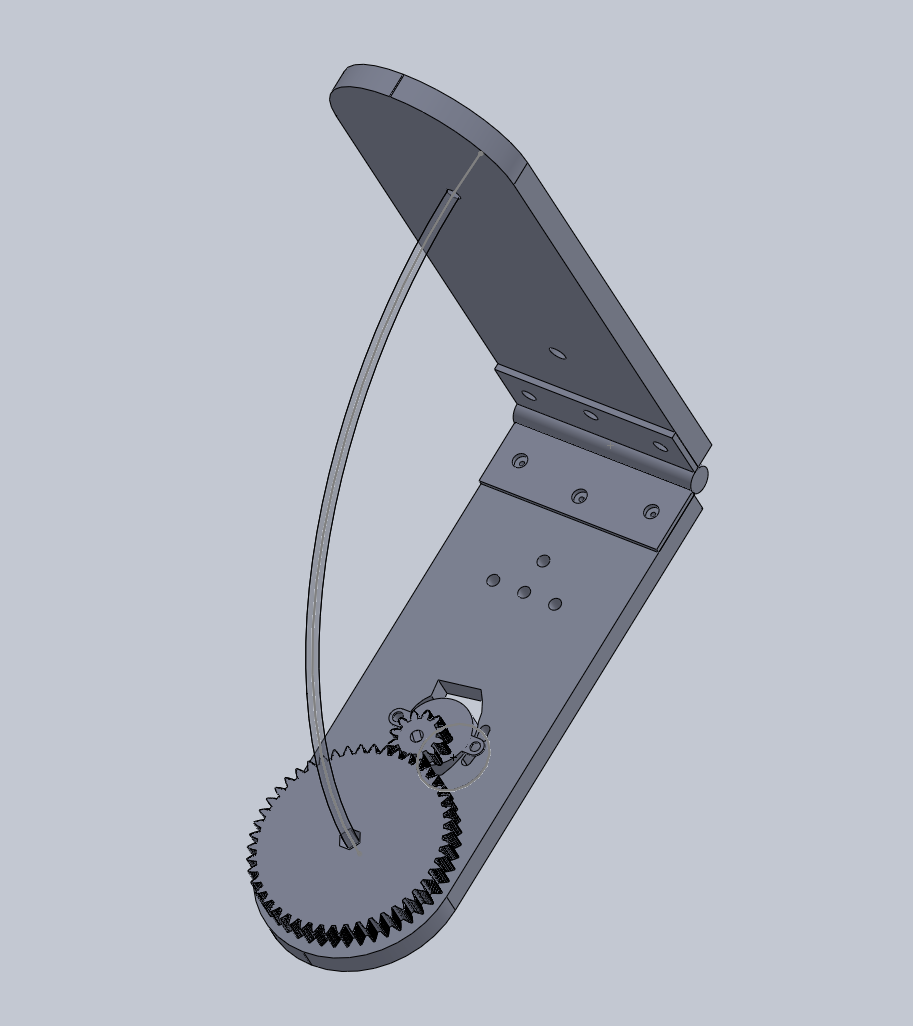 Since I was going to take shots with 70-200⁄2.8, I had to calculate the number of engine steps per minute so that there would be no blurs within one pixel. After all calculations, I made a tenfold spare so that manufacturing errors would not worsen the situation cardinally.

As for gears that were used in the original design, I decided to cut them from plywood or acryl with a laser. 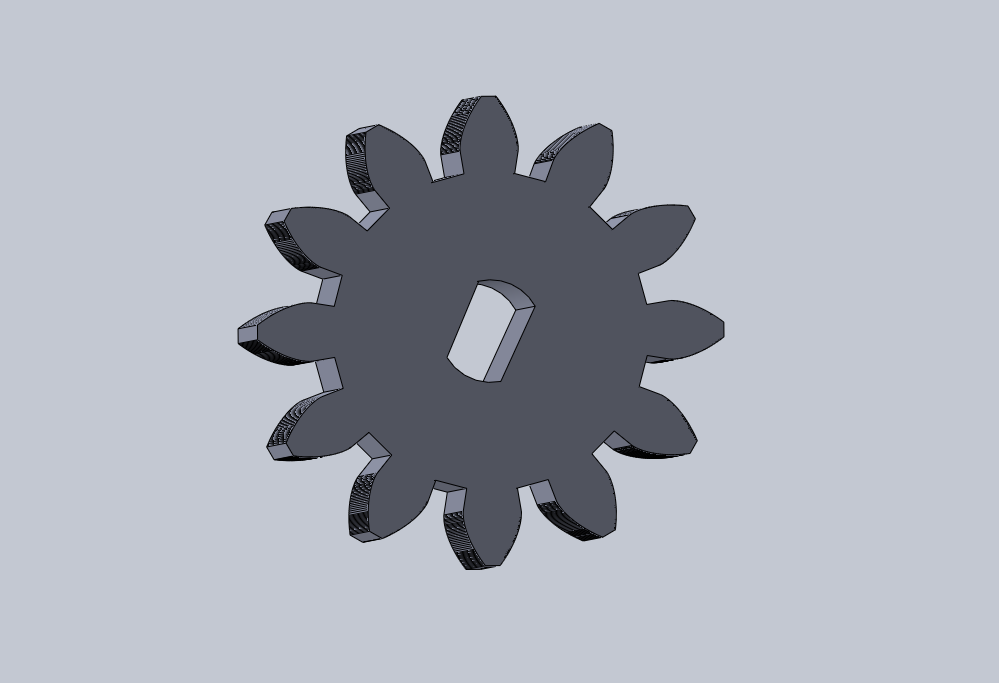 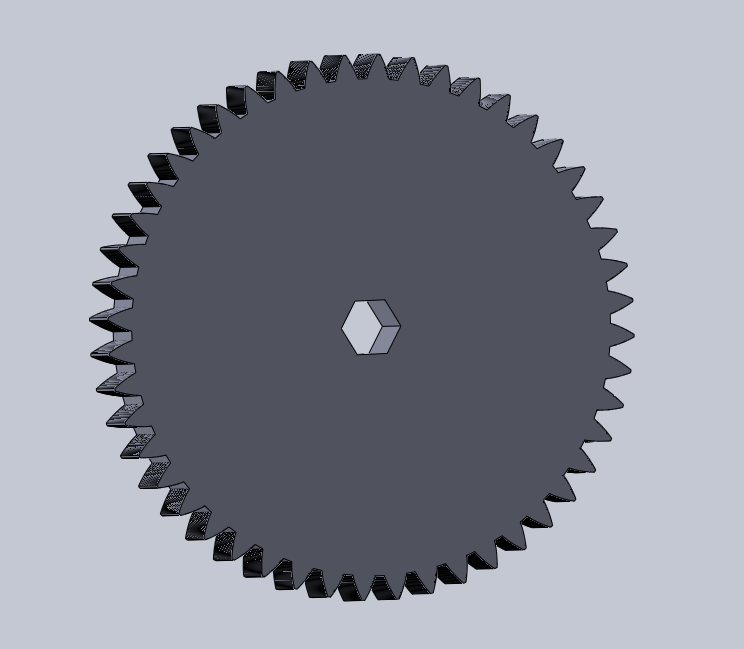 I used 28BYJ-48 stepper motor, which I had before. It had been gathering dust for a while, so it was high time to use it. The motor costs less than $2 on eBay including delivery. It’s fed by 5-12 V. It makes one shaft rotation in 64 steps. It also has a reducer with coefficient of about 63.68395:1. Thus, the external axis performs one rotation in 2037 steps in a four-step mode or 4075 steps in an eight-step mode. The rotational power is not big, but it’s more than enough for the current task. Some people managed to make it perform 15 rpm but with the help of increasing the power supply up to 12 V. I decided that 4 rpm would be enough for me and made gears of four-to-one ratio so that the nut on the bolt would make one rotation in four motor rotations. 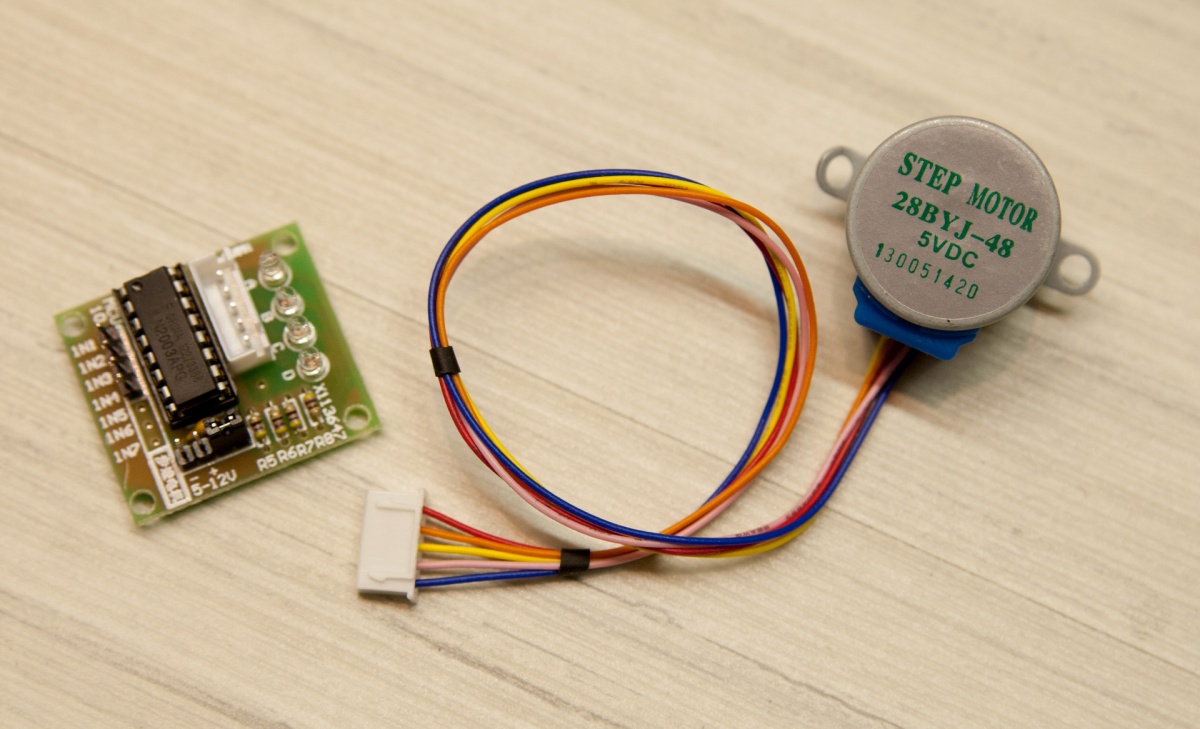 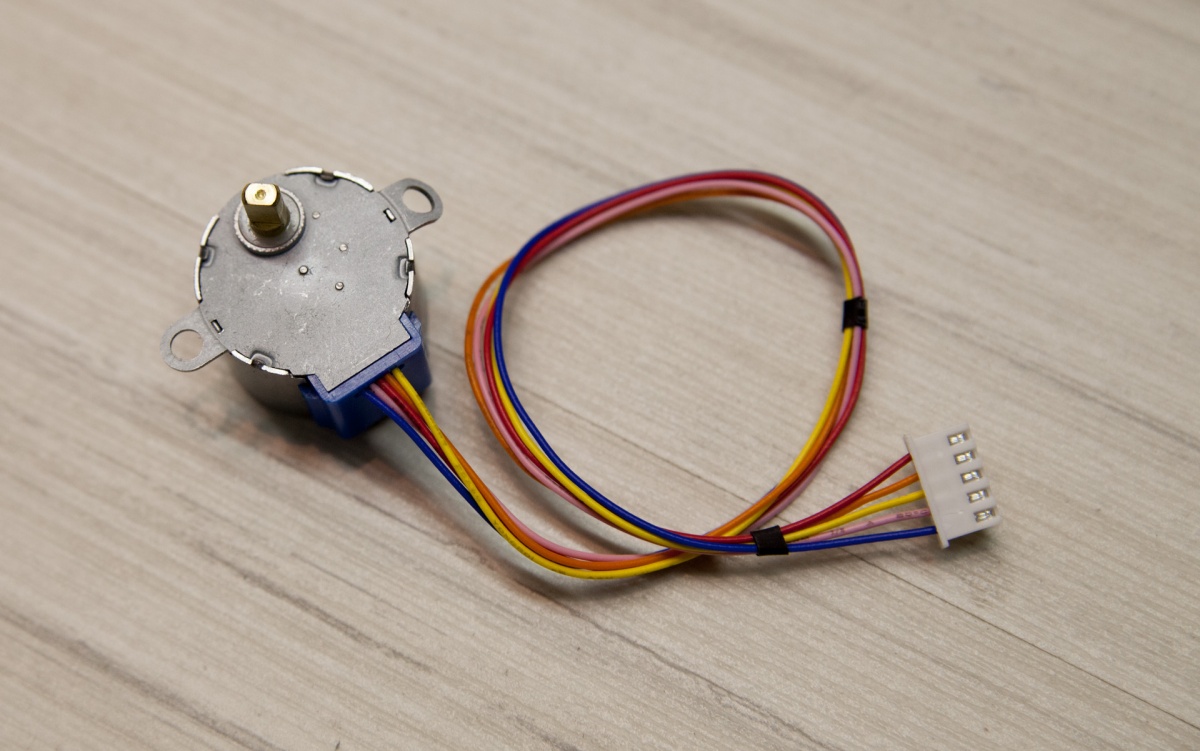 I bought a door hinge with a minimal backlash and used its size to define the width of the pieces of plywood. I bought a bolt at the same store. Then I bought some mounting materials and ordered a small ball head on eBay. Since I have not received it yet, I used one from the old tripod.

I drilled holes for mounting to the removable Manfrotto 804RC2 photohead board. I also made holes for the motor and covered the distance adjustment between the gears by means of the motor rotations round one of the mounting holes.

When I was finally satisfied with the draft, I brought it to be cut and came back with these great components. 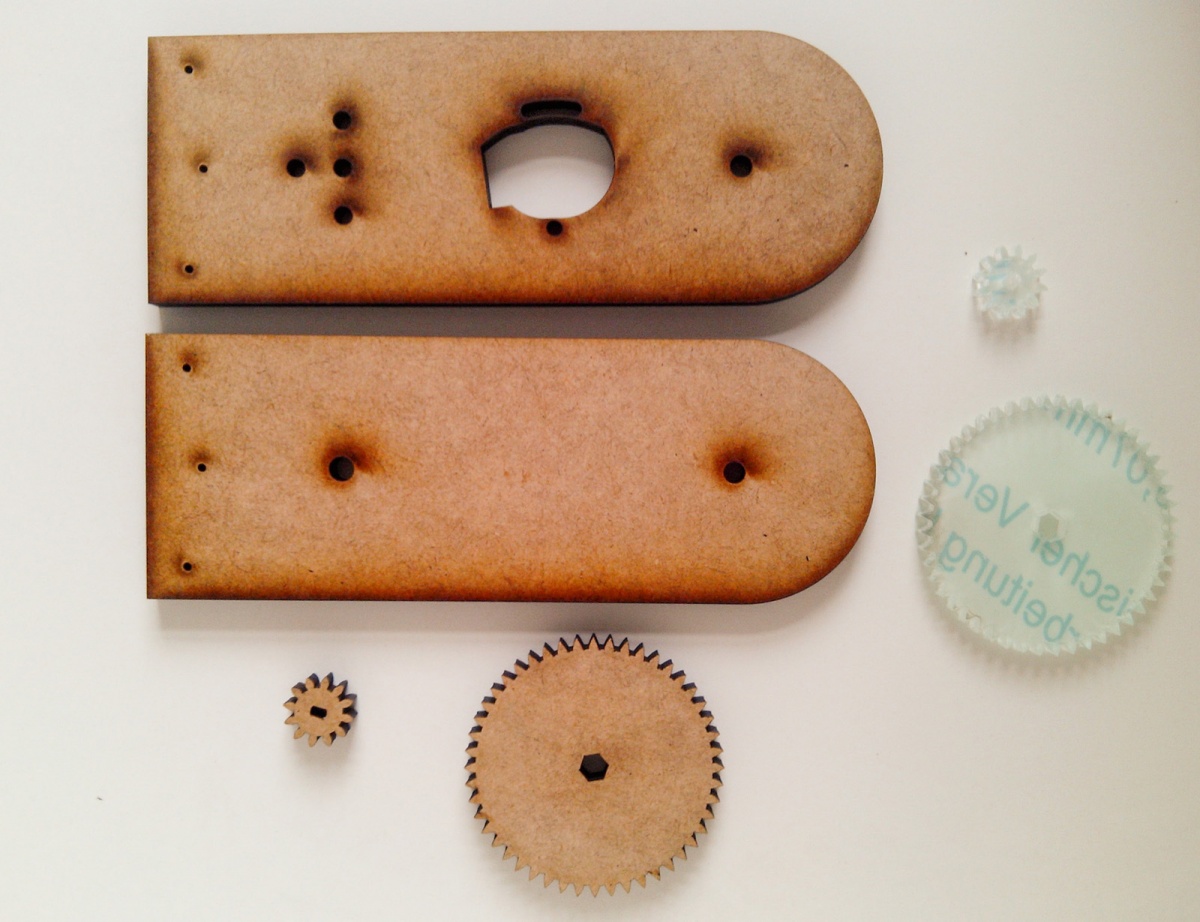 The gears were cut from acryl and plywood. It did not turn out well with acryl, as teeth ends melted. So I had to cure them with a file. To my mind, the stroke of plywood is smoother. But we’ll see. 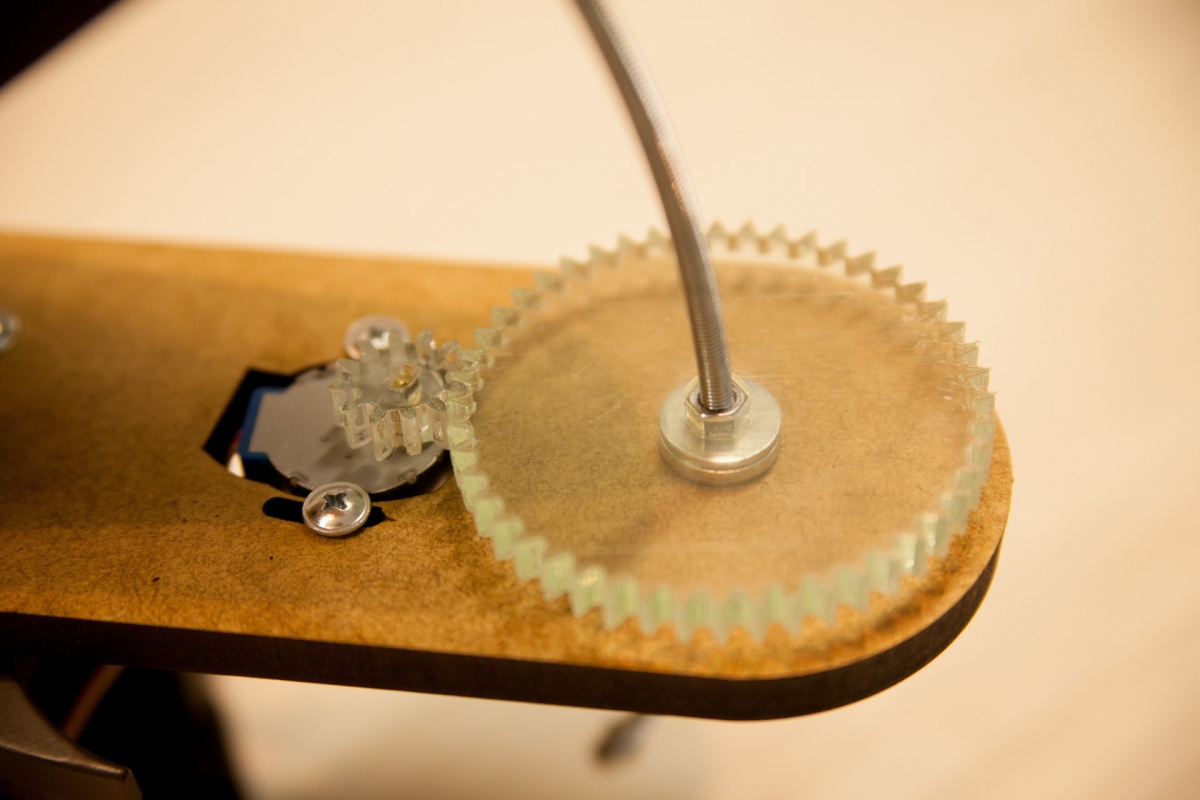 The gear fastening to the nut is really simple. It’s a hole in the form of a hexahedron with minimum tolerance. Acryl is of 0.3 inches caliber, so I could place two M5 nuts. 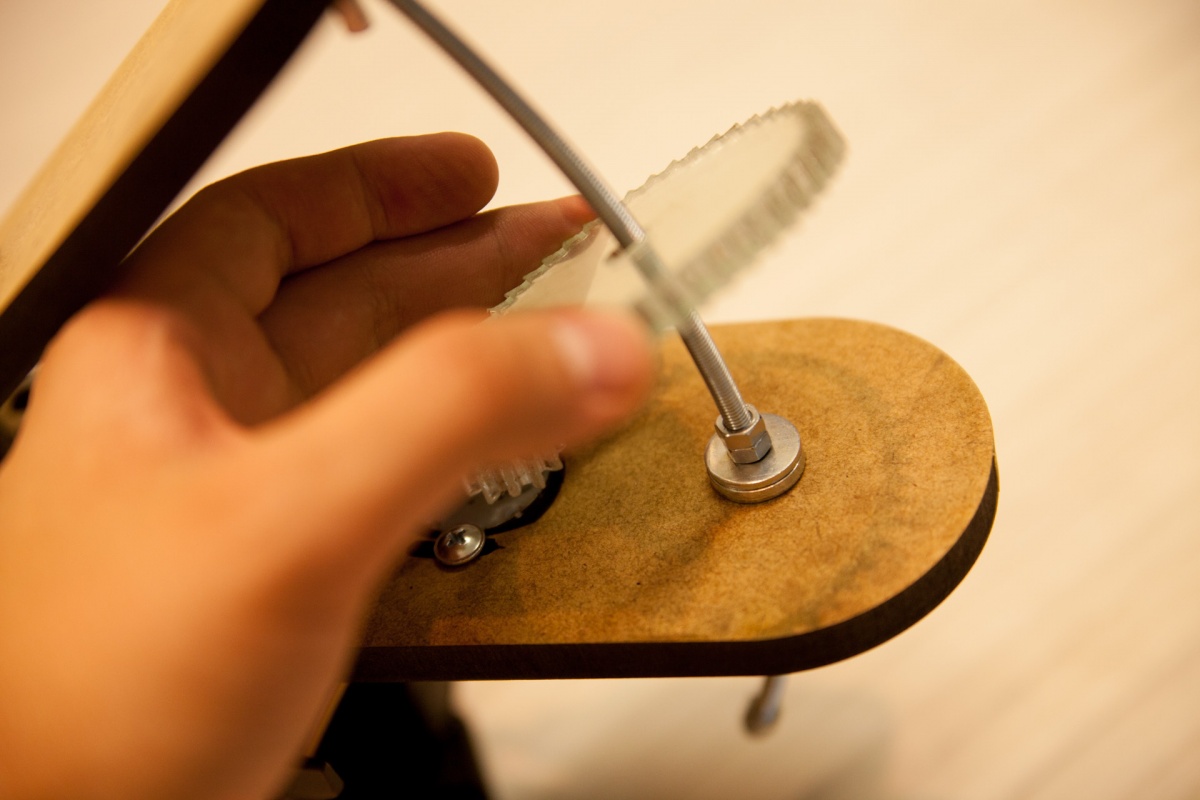 So that tracking would be accurate, a bolt should be curved. Print two concentric circles of the necessary diameter so that their edges would be the size of the bolt. Bend it gradually, putting it on the template for the check. It’s easier to bend the whole bolt at once (it’s 3.28 feet long). You will not be able to curve a short bolt with your hands. Anyway, it was ready in 10 minutes. 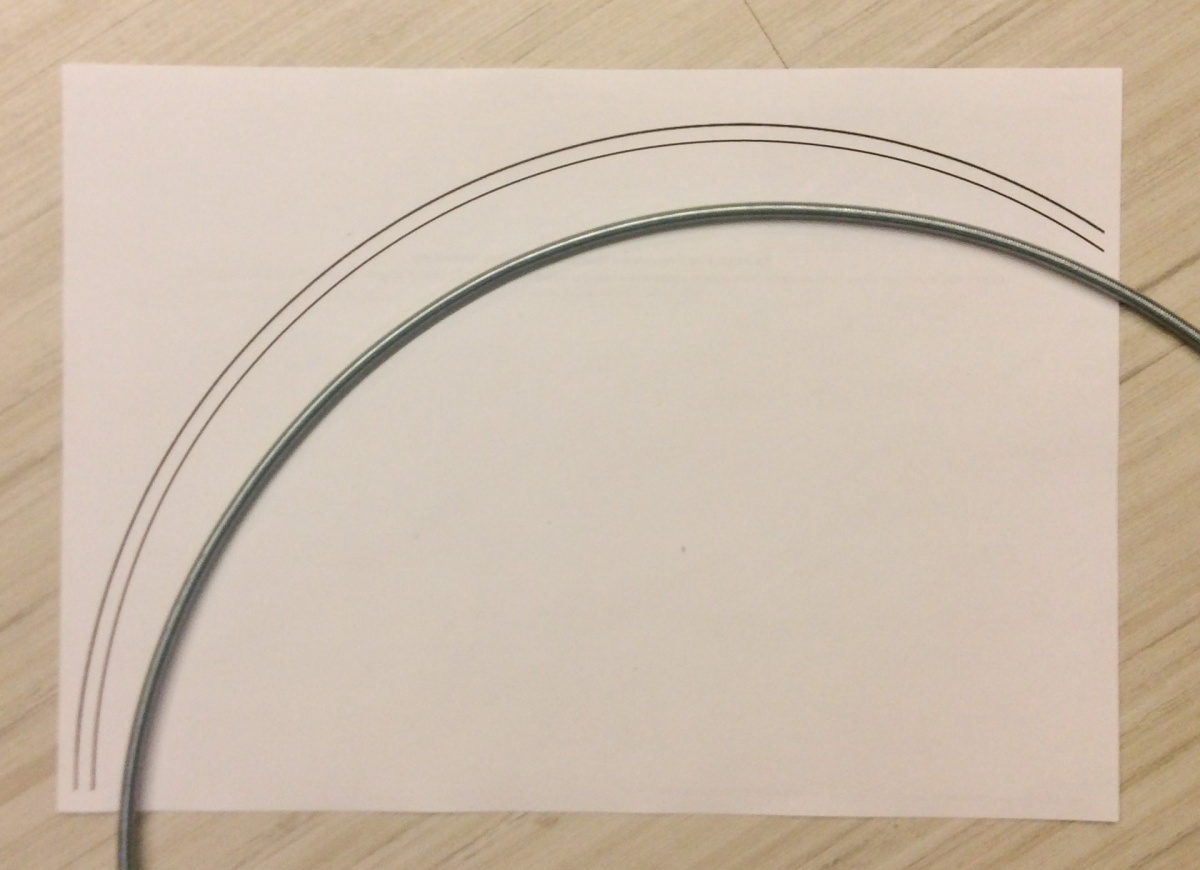 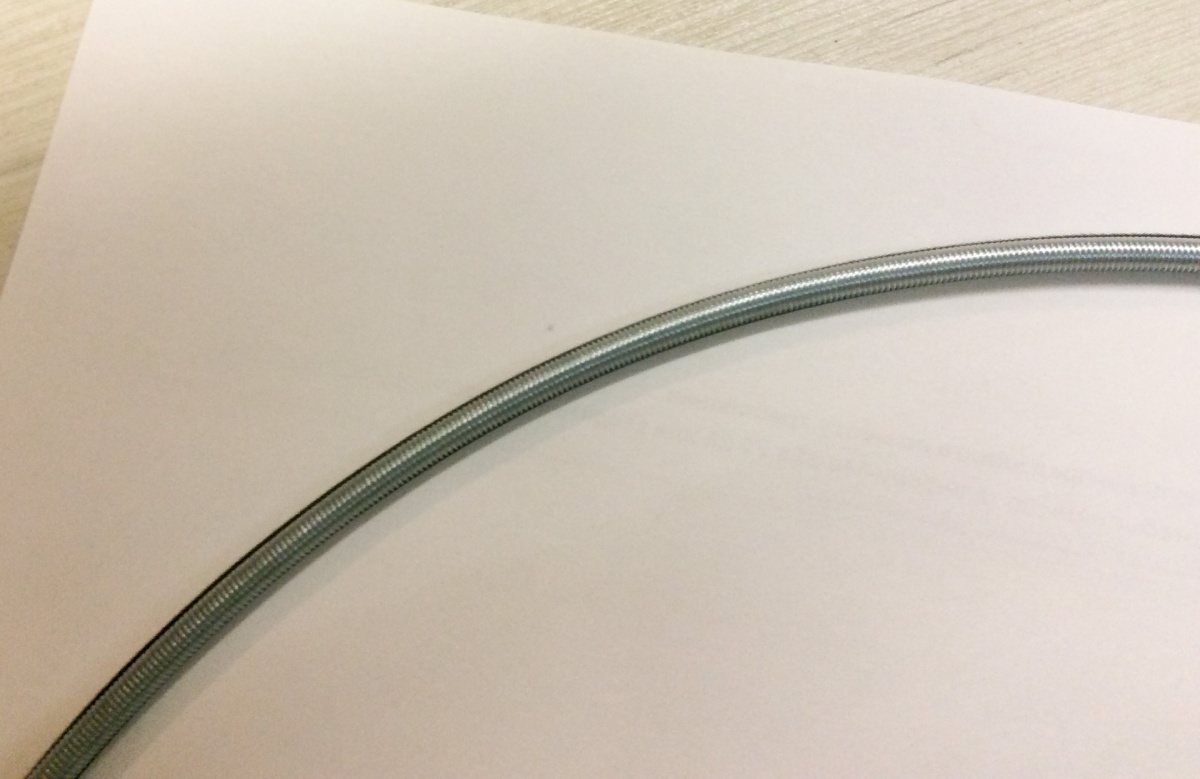 Cut the unnecessary with a dremel tool. I left a segment of around 9.84 inches. This will be enough for more than 5 hours of tracking.

Assemble all of them together: 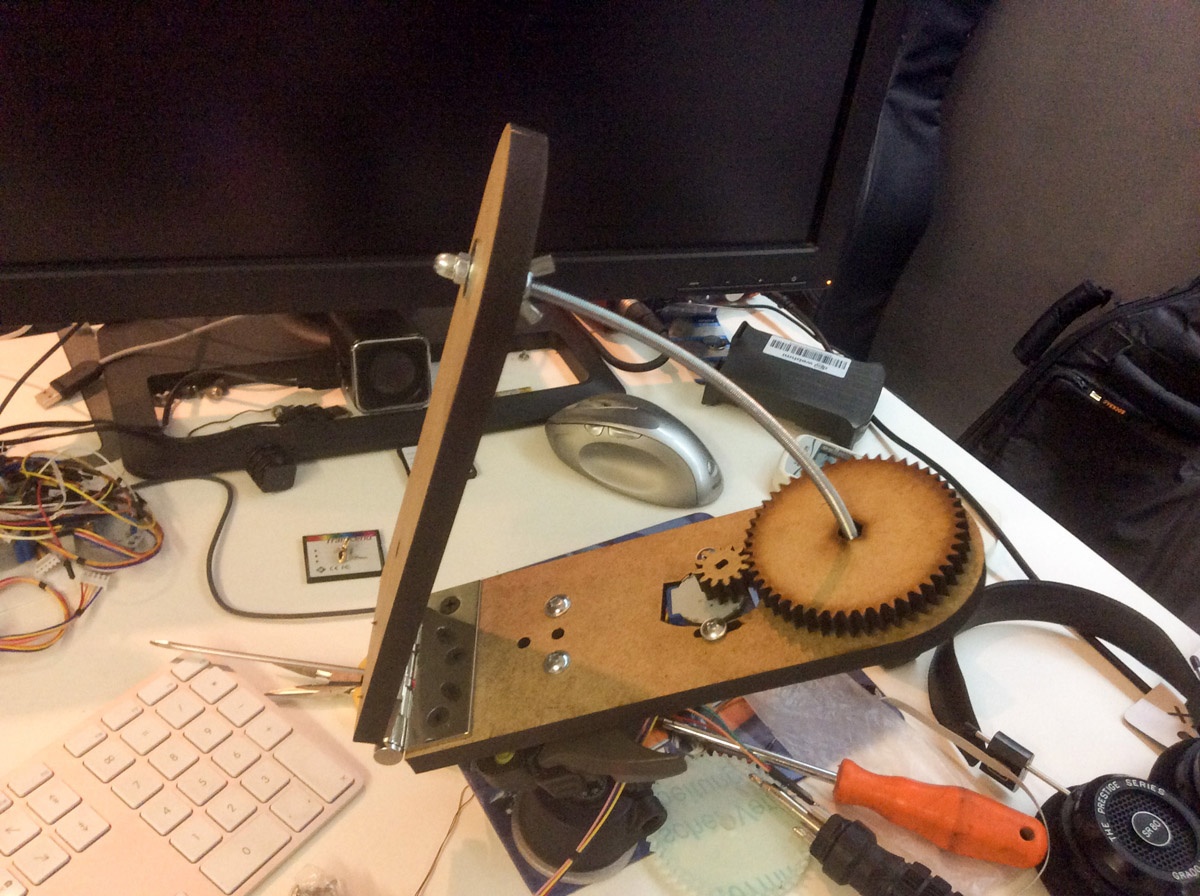 Check the rotation at a written sketch for arduino:

I used LCD Keypad shield so that it would be comfortable to select rotation speed. 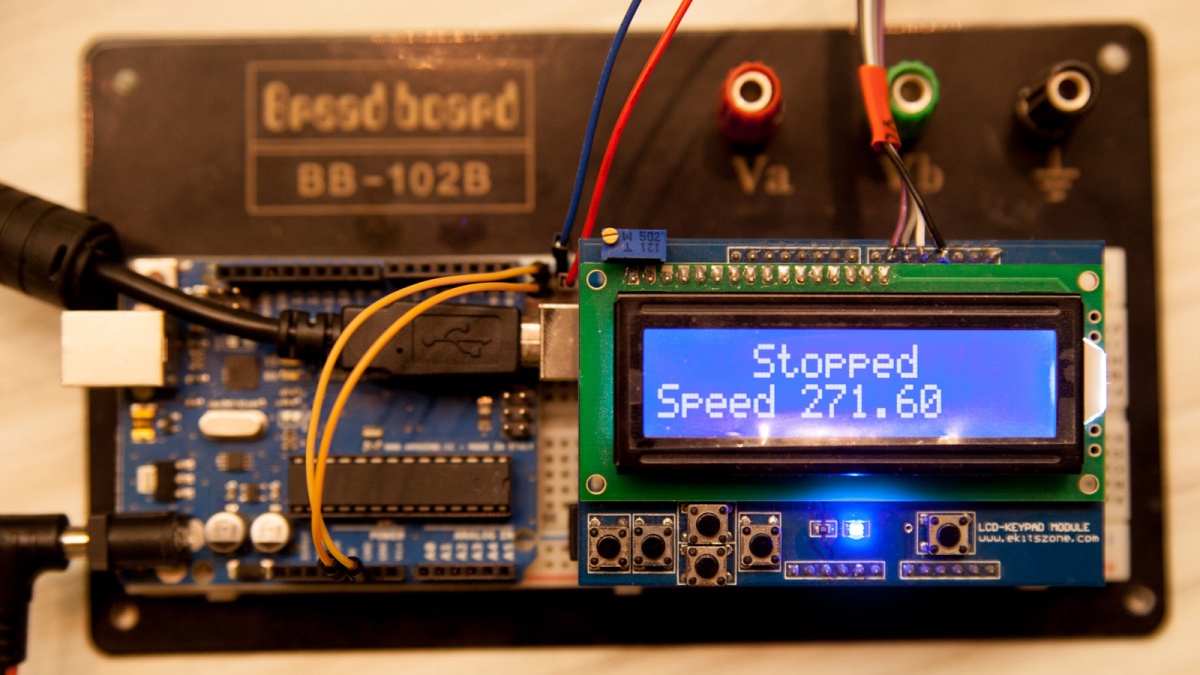 There’re Start and Stop buttons. There’s also an increment/decrement of 25 steps and 0.5 step. The speed is measured in steps per second. Design speed should be 271.6 steps per second. Unfortunately, I am not able to check it, as it rains all the time.

It’s the general view of the construction. 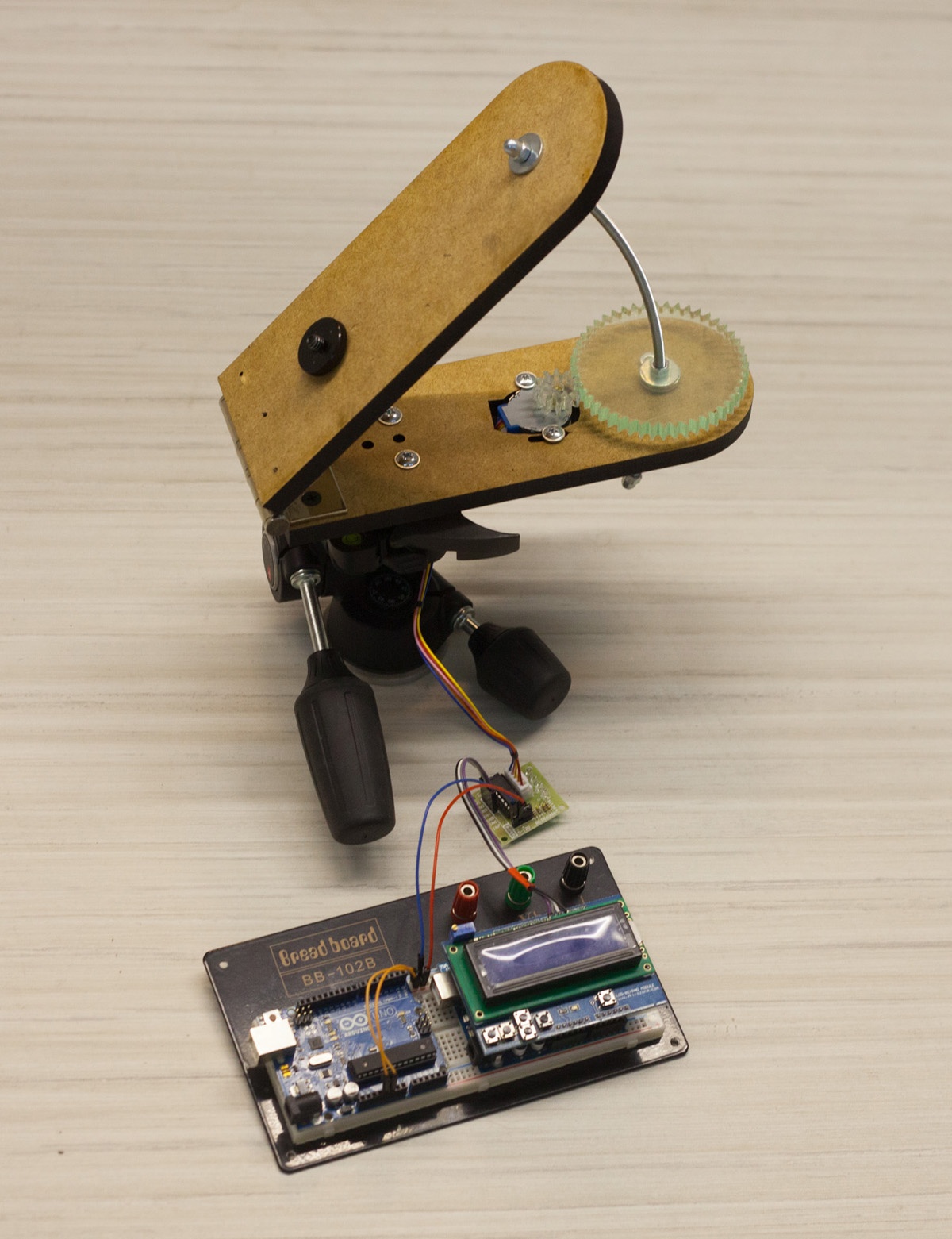 There are two arduinos. Pay no attention to them. I used one of them as the power supply for the motor.

The video of the working process.

I will test it as soon as it stops raining.