Reading an article about getting a job in ABBYY, I came across the following task:

Thinking about it, I realized that the only solutions coming to my mind were those operating in O(n) time. But I found a better solution later.

I am going to use the following denotation of sets:

According to various mathematic traditions, a set of natural numbers can either contain 0 or not. Therefore, it’s preferred to indicate it explicitly in international mathematic texts.

The identity is provided without any proof, but it’s quite easy to prove it by induction.

The matrix on the right is called Q-matrix.

According to the identity,

matrix and take the first element of the first line (the enumeration starts with 1).

calculation comes to raising the matrix to power, let’s take a look at this process in details.

Let’s say there is a

matrix to be raised to

in the form of a tree: 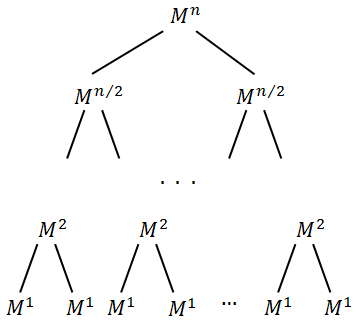 matrix, we should calculate

matrix and multiply it by itself. To calculate

we would have to do the same with

Obviously, the tree height is

matrix is of the same size in any power. Therefore, we can perform the multiplication of two matrices in any power in

of such multiplications. So,

There is a question now: what should we do if

is not a power of 2? We can factor down any natural number

as a sum of numbers that are the power of 2, without any repetitions (we do it all the time when converting a number from a binary to decimal numeral system). I.e.:

is a set of powers, with the help of which we express

is the power of a matrix, we get:

. Thus, we will not have to consider the order of operands during the multiplication task, which simplifies the process a bit.

So, we can represent the algorithm of

calculation if the form of the following two steps:

Let’s estimate the execution time of the given algorithm.

The first step performs in

is the number of binary digits in

Since we have to perform no more than

The third step performs in

, as we should multiply matrices no more than

Is it possible to improve the algorithm execution time? Yes, it is. You should note that the second step does not describe the method of calculating matrices that belong to

set. We know that

is the power of 2 for each of them. Getting back to the picture with the tree, it means that all of them lie in some or other tree tiers and to calculate the greater ones, we should calculate the inferior ones. If we apply Memoization technique and cache all the calculated matrices of every tier, this will allow us to shorten the execution time of the second step up to

, as well as the total execution time of a whole algorithm. That’s exactly what we need according to the task.

Let’s get down to coding. I implemented the algorithm in Python due to the following reasons:

calculation saving the previous two numbers. I implemented it like this:

I used the following technique of performance testing.

values. Objects of MatrixFibonacci and IterationFibonacci (it’s the class that calculates Fibonacci numbers iteratively) classes are created for each

The test outputs a lot of strings like: n 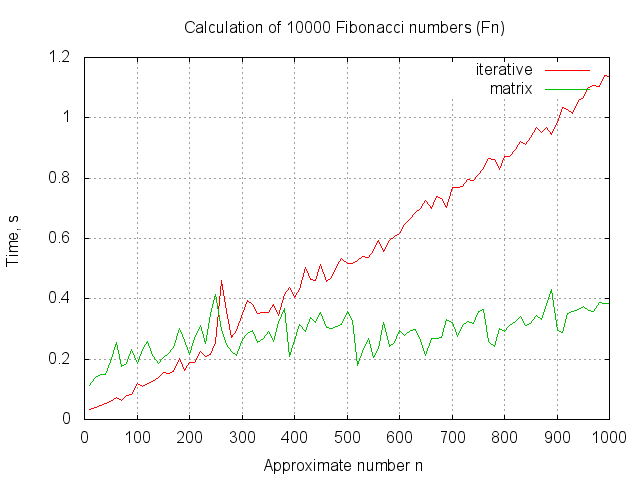 As you can see from the chart, the matrix algorithm leaves the iterative algorithm behind starting from

(its worth noting that

will not fit into unsigned 64 bits). I guess, it’s possible to say that the algorithm is impractical, though its theoretical speed is quite good.

You will find the complete source code with the benchmark here.

The code for gnuplot to build charts: