It was a usual gloomy winter morning. My colleagues and I were drinking our morning coffee, sharing the news and there were no signs of trouble. But then a friend told about…

(a quote from a chat in Skype):

A Picture to Attract Attention:

Since I work in the company engaged in the development and manufacture of electronics, my colleagues and I are began to discuss options for creating a USB flash drive, that «would burn half a laptop down.» We had plenty of hardcore, fantastic, as well as quite real, options. This fun discussion could have been the end of the story, if I was not going to order the production of printed circuit boards for other projects.

As a rule, the USB interface of a computer has a USB plug connection -> ESD diodes (static protection) -> filter elements -> security elements in the chip that contains the physical layer of the USB interface. In modern computers, the USB “physics” is built almost in the processor. In older computers, North/South bridges are in charge of the USB. The task of the designed USB flash drive is to burn all of this stuff, or at least kill the USB port.

Within a week, I have developed quite specific circuit implementation, ordered components. After a few months of waiting for them, I made a full-fledged prototype. I tested the idea and “burnt down” everything I could. 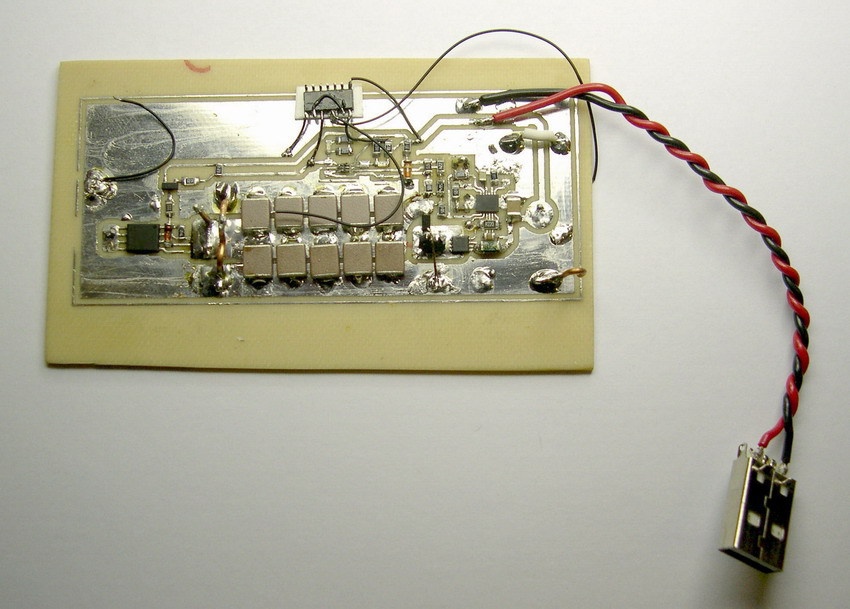 Then, I developed and ordered printed circuit boards in China and made a combat model.

Soldered it by hand, I am so-so mounter.

I designed it as a regular USB flash drive.

The basic idea of the USB drive is quite simple. When we connect it up to the USB port, an inverting DC/DC converter runs and charges capacitors to -110V. When the voltage is reached, the DC/DC is switched off. At the same time, the filed transistor opens. It is used to apply the -110V to signal lines of the USB interface. When the voltage on capacitors increases to -7V, the transistor closes and the DC/DC starts. The loop runs till everything possible is broken down. Those familiar with the electronics have already guessed why we use negative voltage here. I‘ll explain to others that negative voltage is easier to commutate, as we need the N-channel field resistor, which, unlike the P-channel one, can have larger current for the same dimensions.

I’m not going to talk to you about the application area, but a former colleague says that it’s like an atomic bomb: cool to have, but can not be applied.

Arriving at work, you find a USB drive on your table. What would you do?

Would you buy such «device»?